I grew up in Nigeria, in a bustling suburb of Lagos in the 1990’s and 2000’s. It was a beautiful childhood and I spent a solid portion of it reading and watching movies- my younger brother loved them. I did not visit the US or Canada at any time, yet I was could identify many landmarks in those countries and tell you where they were located, I could list their important leaders, statesmen and heroes and I could describe pizza even down to its taste without having seen it before.

Many of us have the same story, we can tell you about mac and cheese, sesame seed buns and burgers, pepperoni pizza and baloney sandwiches yet we do not know about the delicious delicacy made from Bambara nut (same thing that is used to make okpa), or tuwo dawa (guineacorn tuwo) which is eaten by people in Niger state, a mere eight hundred or so kilometres away. Why do you think that is?

Think about the Hollywood movies you’ve watched or the novels written by Americans/Canadians/Europeans that you have read, you’ll see how much effort these guys have taken to represent their countries well. For example, we all know that the US will do anything to protect just one citizen. How do we know this? We’ve seen it in countless movies (Saving Private Ryan quickly comes to mind), we have read it in books. We know that the US is so competent and can handle any crises plus they have a way of ferreting the truth behind any circumstances. We know this how? Thousands of movies that have propagated that image, all the spy/espionage novels and writers from Ludlum to Baldacci to Connelly have all planted that seed in our minds. It’s so powerful that a sitting president of this country when asked about a missing sum said if X amount of money is missing, America will know.

These countries (the US especially) actively protect their image, do you know that you cannot make a movie that shows the US military in a bad light and make money from that film? It will cost you a lot more to make it (you can’t use military equipment to shoot and getting those props from other sources cost three times as much) and you will not even get good box office returns. Besides even when they do, you’ll still find one patriot who will “do the right thing” and through his sacrifice and efforts, right will eventually triumph. Do we still wonder why the US continues to wax stronger?

When I watch Youtube videos, I always read comments- most times the comments are more interesting than the video. The comments on Emmanuella’s “this is not my real face video” was made up of a significant number of people asking ‘what is Tolo-tolo?’ That video has three million or so views with at least half of those views coming from outside Nigeria, with that video we have successfully exported Tolo-tolo to at least one million fresh eyes. What if they made a skit centred around Ogbono soup or Amala ati Ewedu or Ofe Akwu or Tuwo Shinkafa?

Nollywood movies are watched around the world especially in Africa (many thanks to DSTV) there’s literally no country in Africa where Mercy Johnson or Ramsey Noah or Majid Michel would not be mobbed. That industry has built stars and honed some perceptions about Nigeria (I wrote about it HERE), if our scriptwriters, producers, directors and actors made a conscious effort to promote our culture, food, tourist attractions etc. Instead of making movies about rituals, why not make movies that accurately portray our traditional religions (I have to commend the Yoruba movie industry here, they are making efforts at that), just as the American director would use two or three minutes to show the process of ordering pizza and show beautiful shots of pizza, you can also show the preparation of eba or pounded yam using a food processor (read about it HERE)

Writers are not left out, do you know that after Dan Brown wrote The Da Vinci Code, The Louvre museum in Paris recorded more visitors. There’s even a Da Vinci Code tour of the museum that is organised by private tour guides and they also have the Da Vinci Code tour of Paris. His other books have also generated such interest in other towns too- Rome for Angels and Demons, Florence and Rome for Inferno, Washington for Lost Symbol. Foremost Nigerian novelist, Dr Chimamanda Ngozi Adichie grew up in Nsukka and that city has featured in all her novels and even her short stories. Again many people around the world have come to know of the sleepy university town through her books. Buchi Emecheta is one of my favourite writers and she wrote about her hometown of Ibuzo with such fondness that I wanted to see the place so desperately.

Imagine a thriller set in Benin City or Warri or Owerri. Lagos gets enough publicity (have you seen Captain America- Civil war? A portion of it is set in Lagos and the movie is dope, go see it if you haven’t) so I’m not going to mention Lagos. Who says the next Dan Brown or Robert Ludlum cannot be Nigerian? Well I admit there are many hurdles in the way of that wannabe thriller writer but when he or she finally makes it, we’ll find that the gains would spill to all of us.

Government’s efforts at selling our culture and nurturing tourism has been subpar, non-existent even- I have to be honest. I currently live in Benin City and it is a city that is steeped in culture, a culture that is world famous, yet you do not see tourists here. Nothing has been done to encourage them to come, there are no provisions for security, the very many historical sites are in bad shape (the moat sites are refuse dumps!), even the many sculptures around Ring Road are not well maintained and most importantly the people at the ministry for culture and tourism are such blockheads! There’s no official tourism roadmap for the state, no provisions for guided tours whether government organised or private partnerships, no nothing. 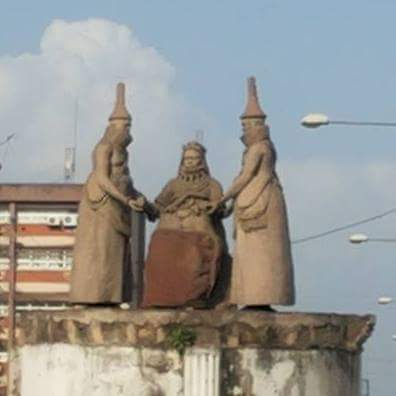 I don’t want to talk about our museums, especially the National Museum Benin City- which has the most unserious staff in recorded history. Visiting our museums would be a very boring experience, not because the artefacts and relics are not interesting but there’s no pizazz to the exhibits, nothing that pops, nothing that makes you want to tell your friends about it and even if you do, you get no bragging rights. I visited the National Museum Onikan in Febuary and I still haven’t made a post about it, it’s that tiring. While I have never been to New York, you can bet that whenever I visit, I’d make a beeline to the Museum of Modern Art (MOMA) and I’d write about it the next day.

Do we have to wait for Nollywood and Nigerian writers or government to sell our culture? NO! We all have platforms on which we can showcase our rich culture to the world, from Facebook to twitter and Instagram, we can do our part. Bloggers also have an important role to play, these days more and more people are turning to digital media for their content needs, more people would rather visit Adaezewrites than read a book (I haven’t read a book this month but I visit her blog almost daily). You don’t even have to be a megablogger like Adaeze (Yes Adaeze, you are a megablogger) to be successful at making our local content international.

On Friday, I was looking at my annual stats and I had just below ten thousand views in these five months but when I checked the countries, I was astounded to see that I had readers from more than eighty countries in the same period and I repeat, my stats are in thousands! Not tens of thousands or hundreds of thousands yet I have readers from about half of the countries in the world. Many bloggers I know boast of even better stats, so we have no excuse. Even you can bring Efo riro to the man who lives in Romania who stumbled on your blog when he was searching for Fela Kuti’s music, so what are you waiting for?

This is the conclusion of a two-part series on Local Content, see the first part HERE