It started with this picture I shared on facebook.

My parents and I had been talking about cigarettes and smoking, my grandfathers had been chain smokers and we were talking about how their smoking affected their lives. My father recounted the story of his father’s love for buying one stick at a time, guess who had to go and buy the cigarettes? My dad! My dad often told us the reason he swore he’d never smoke was his father’s penchant for disturbing him to buy sticks of cigarette.

Daddy’s family lived at no 2 Fagbile street- yes my dad and even my mum were born in Lagos, a woman sold cigarettes at no 3 which was right opposite no 2. Wouldn’t it have been easier for Papa to walk across the street and get his stick of cigarette? Well, my grandfather didn’t do things the easy way.
“Ezenwa” my grandfather’s voice would echo down the street.
My dad was always at no 7 Fagbile playing football between 5 and 6pm; that was also Papa’s favourite smoking time. My dad would leave his match at no 7, run down to no 2 to buy a stick of cigarette for his father from no 3. It always seemed like Papa knew when Daddy was about to take a free kick or penalty or finally score a goal, the old man must have been psychic. He wouldn’t buy a pack of cigarettes like anyone would, no! Papa had to buy them in bits.

Daddy swore he’d never disturb his children like that, he’d never smoke or ask his children to bring something that was only ten feet away from him. I can testify that he’s never done any of those things, he devised his own ways to annoy his children.

Back to the picture, I showed it to my brother Obinna. He’d been an ardent fan of party rice and for a long time wouldn’t eat any rice that wasn’t party rice. We laughed at his party rice phase and then my mum confessed that there wasn’t anything like “Party rice” it was just regular rice- usually jollof rice.

My brothers were very picky eaters, I wasn’t choosy, I’d eat anything that wasn’t yam, beans, rice or eba. I didn’t really like bread, I’m famous for saying “bread is not food, it’s just to hold hunger”. My mother was up to the challenge, she told us many things to make us eat. She’d tell us to eat so that the food would enter her stomach- yes we believed that. You’d believe it too if you were seven years old and your mother could tell the most convincing stories. Do you know how she stopped me from licking toothpaste? See the story here

At the time we were growing up, Maggi Family Menu was on the air. We loved watching the programme, all of us- my brother and I loved watching the preparation of “exotic” food. My mother would cook ukazi soup and tell us it was Canada soup from the TV show and we would eat and ask for more, she’d cook bitterleaf soup and call it Ibadan soup, her three children would eat and even request for it another time. If she’d called it Ofe Olugbi (we don’t call it onugbu) none of it would finish it, she’d have to force us to eat it in the first place. She never tried it with okro, oha or egusi soups, we’d have finally seen through the plan. She’d tell us beans would make us tall and she would serve the beans with fried plantains and custard or akamu with plenty milk. I remember the day I came back from to meet beans for dinner with no plantain or custard, I felt bereft, almost like my mother had abandoned me.

After one term in boarding school, I learned to eat almost anything. I even ate yam for breakfast at the Farafina workshop, you can see how far I’ve come.

“So there was nothing like party rice” my brother asked, I think he was shaken by the news. My mum laughed and told him rice was rice. Most people associate firewood cooked jollof rice with parties, for us; Wednesday and Sunday evenings brought all kinds of rice which we swallowed hook, line and sinker as party rice. Na wa o.

Thirty minutes later, my brother knocks on my room’s door and opens it bearing a plate of rice.

“Is this party rice?” I ask him

His laughter was his reply. 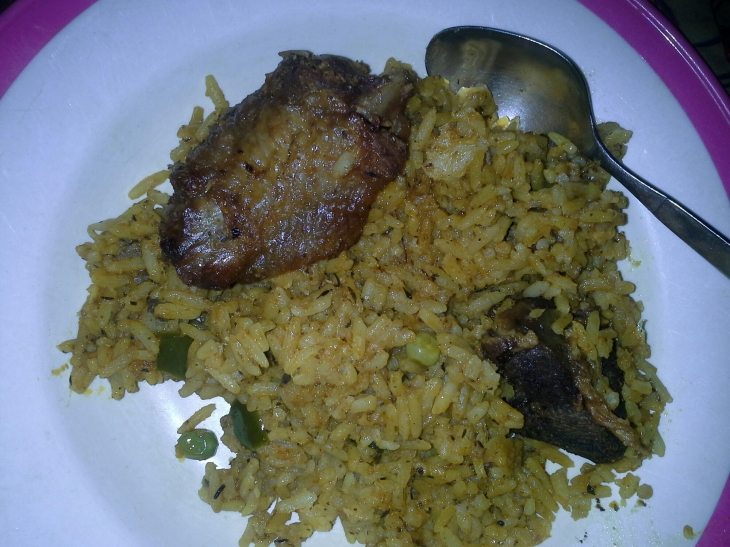